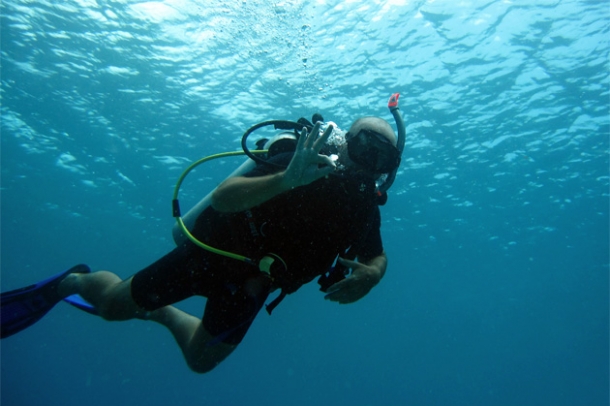 A few days ago when I was snorkeling for the first time on Gili T. I ran into a giant sea turtle grazing on the reef. Once in while it would go up  to get some air and then I would see it’s little head coming out of the water. What a beautiful sight! And they swim like  astronauts float in space.  There and then I decided to get my diver’s license.

Luckily it turned out to be easier to get a diver’s license than a driver’s licence (four practical exams, five theory exams in my case). And a lot more fun too!

Instead of driving roundabouts, practicing parallel parking and memorizing traffic signs I would cruise control along the current, overtake moray eels, black-tip sharks, clown fish, angel fish and cuttlefish,  and make a U turn at a  collapsed sea platform overgrown with colourful coral.

So, four dives and  fifty multiple choice questions later I am the proud owner of an SSI international diver’s license!

0
There are no older stories
Tanjung Rhu, Langkawi